YOUR BRIDGE TO LAUNCH TM 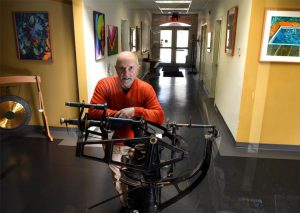 After reducing Optimum Technologies’ workforce from about 25 employees to just himself at 114 Pleasant St., it yielded the 9,000-square-foot Southbridge Tech Incubator, which Mr. Chinnock says is the only technology incubator in South-Central Massachusetts.

Its mission, Mr. Chinnock said, is to create a workspace for emerging technology companies, particularly in medical technology, “where the various tenants in the building can collaborate, create together, share resources, and overall foster a dynamic, stimulating environment for emerging tech companies.”

He added: “I have a lot of extra space and all the equipment is still in place, so my vision is to sort of carry on the way Optimum did, but as an incubator, where again, emerging companies can come in and make use of all this stuff — equipment and facilities — that I’ve accumulated over the past 25 years.”

He’s presently leasing offices and laboratories. To date he has one tenant.

At $24 per square foot, leases include internet, use of a copier/printer, heat, electricity, groundskeeping, snow removal, insurance, security system, fire alarm, maintenance and use of common areas.

Mr. Chinnock said comparable space in Cambridge would price at $80 to $100 per square foot.

Tenants have access to a variety of technology prototypes: video microscopes, light-curing equipment, an oven, vacuum system, and a variety of tools for assembling and testing products.

Mr. Chinnock’s medical technology company moved into the building and refurbished it in 2013.

Its lone tenant is ExtruPharm, a consulting company that specializes in hot melt extrusion practices for pharmaceutical manufacturing research and development. With a goal to deliver drugs at a steady rate over months or even years, the startup company mixes an active drug with polymer, which is then run through an extrusion machine to make implantable drug-delivery systems.

Company President David White said its lease with Mr. Chinnock began this month, but he was in contact with Mr. Chinnock since October in hopes of renting sooner. Mr. White said the incubator’s space and amenities are nice, while Mr. Chinnock had been a pleasure to work with, singling out his help with recommending insurance companies and electricians, and getting the business set up.

There are other incubators in the state, including a biotechnology and another with a general focus in Worcester.

As to his prospects for success in Southbridge, Mr. Chinnock said, “I think it can work here because, for most of my prior company’s 25-year history, we were always able to find the people we needed. Sometimes they traveled some distance, but we can draw from” MetroWest, Worcester County, Providence, Hartford and Springfield.

The biggest challenge thus far, he said, has been getting the word out. He said the town had been helpful in that regard, spreading word to chambers of commerce, MassDevelopment and other state agencies related to business development.

Mr. Chinnock said being a board member of the Southbridge Business Partnership, consisting of about 70 companies in town that promote the town and make physical improvements, is another vehicle.

He said he then hopes the challenge would shift to helping tenants.

“I’ve been in the industry for 40 years,” he said. “I think I have a lot to bring to startup companies in terms of experience and connections. That’s really what I want to be doing long-term.

“Part of what tenants get here,” he continued, “is access to this deep network of experts that we built up over 25 years or more. All kinds of mentors, advisors, consultants, subcontractors and suppliers.

“Somebody comes in and they have an idea for a new cardiac device, there’s a dozen people that I can connect them with in the cardiac space right out the gate for advice. I know a lot of vendors that can make components that are needed for cardiac devices. I can help them with a marketing plan, or doing market research.”

“Enough to have some real synergy, some dynamism in the hallway, but not so many it’s unmanageable.”

Alexandra McNitt, executive director of the Chamber of Central Mass. South, said of the incubator, “It would be a nice and welcome addition to have something like that doing well in Southbridge. … I think it’s a neat idea. Hopefully he can attract some businesses that can make something happen and would want to stay around. That would be the best scenario, and they could then grow somewhere in the immediate area.”